It’s every musician’s potential nightmare: after dedicating countless hours to study, practice time, rehearsals, research, and every other imaginable form of preparation, it’s time to search for performance opportunities.  In some cases, a clearer path is forged for individuals who are able to successfully compete for an award, which is often padded with the reward of a generous concert schedule for a coming season or so.  In other instances, through general exposure, recommendation, or a promoter’s positive impressions after attending an artist’s live performance, there is also the possibility of receiving an invitation to perform at a particular venue or concert series.  Through even yet another means, which may actually be the most common scenario, prospective musicians eagerly search for contacts before reaching out to venues and promoters in hopes of securing a concert date.

There are so many factors to consider as aspiring musicians, not least of which is determining how and where to concentrate our efforts for these coveted concert opportunities.  Consequently, there is equally as much criteria for promoters to factor in when constructing their future concert schedules.  How do we inspire an invitation from a concert promoter?  What do we do if the response is negative? 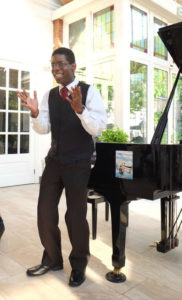 As concert musicians, we tend to focus very heavily on honing our craft, and rightfully so.  The task then, however, becomes a matter of finding the necessary means of delivering our art to as wide-based an audience as possible.  I wouldn’t describe the notion as radical to acknowledge that the internet is arguably the most important international resources available, so how we adapt to – and take advantage of – its omnipresence has now become highly significant.  In years past it was, and in many cases still is, necessary to prepare for months on end for a notable competition (or series thereof) which inevitably requires a tireless practice schedule.   This extensive, exhaustive, and borderline obsessive routine all serves to sharpen the necessary skills for presenting a selection of repertoire at the highest possible level.  As competition day arrived, it then becomes an all-or-nothing affair.  Many participants stake their careers on those moments, while others secretly anticipate that a notable performance could still be enough to open eyes – even if taking home the top prize, with all its notoriety, ostensibly remained out of reach.

After immersing in this daily routine of practice and preparation, it is likely then appropriate to record this music for mass distribution – a means of codifying all of those cumulative hours of hard work, while doubling as a “business card” of sorts. For listeners who may not have an opportunity to hear a particular musician perform live, or for audiences who may not be familiar with a given artist, recording and distributing an album (vinyl, compact disc, stream, etc.,) often serves a significant purpose.  What has happened, particularly with the rise of the information age and internet, has created an evolution in these circumstances.

The music industry as a whole has continued to evolve, and so too must the “traditional” classical music world.  Major competitions are now available to be watched via live stream or playback. It is now easy to record and upload a video from the comforts of your own home, studio, or concert venue which makes accessibility exponentially more convenient and internationally widespread.  There are so many more components, both at and away from the instrument, to consider when facing today’s challenges of building an active performance career.  An up-to-date website is always useful, combined with a video channel to catalogue the performer’s capabilities and document performances, all while maintaining an active social media has become the standard, if not minimum, a requirement in order to catch the attention of prospective promoters.

However, checking all of these boxes does not guarantee success.  Building and maintaining a fan base must continue even during the periods when the concert schedule is less active.  Engaging with an audience – both during a concert and on social media – is becoming an increasingly important aspect of communication, which again represents another example of this evolution which has now become a semi-standard practice.  The dialogue between artist and audience creates overall appeal and a fundamental connection for long-term sustainability.  The more an audience or prospective promoter feel a relationship to the performer – whether through the musical output, culturally, or personally – seemingly the more likely the chance for an invitation.  In some cases, promoters tend to favour those from their own respective communities, while in other cases it boils down to artistic appeal, marketing, and how the prospective artist may attract a noteworthy audience.

In all, the trajectory is rarely – if ever – in a straight line.  It is never easy to receive an unfavourable response (or no response at all!) or figure out how to market one’s self appropriately.  It may take time, frustration, or in some cases good luck to receive the reaction we all hope for.  All we can do is continue to practice hard, prepare well, develop a plan for success, and see it through.  There are so many definable components to consider, intertwined with a variety of intangibles, so to avoid the frustration of trying to please everyone all the time it is more advisable to stick to what we know – sharing our love of music!

Until next time, thanks for reading!