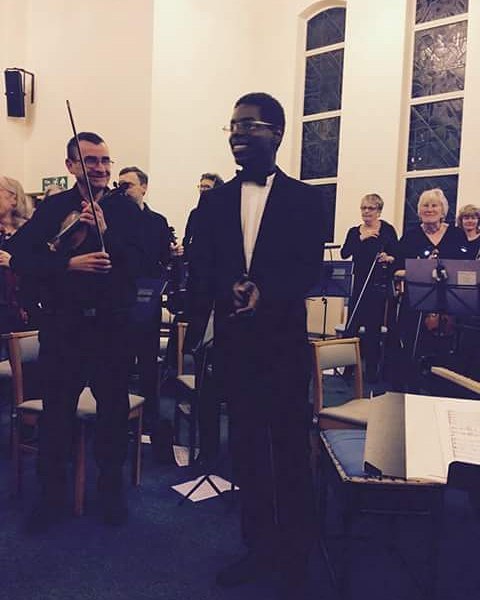 A journey to England’s capital

Oh, what a delightful return it has been to Britain yet again!   There have been many excursions over the past few years, especially to London –  back in the day visiting friends and fellow expats when I first moved to the Netherlands in 2008; then later arriving just in time to experience the electric vibrancy of the 2012 summer Olympics opening ceremony  festivities; right up to last year’s debut at the iconic St. Martin-in-the-Fields.  Most recently, there has been this summer’s mini tour with yet another seemingly standardized half-year month visit impending.   This time, after arriving in London on Thursday afternoon (Nov. 17, 2016), it was straight to rehearsal with the Winchmore String Orchestra.

However, as often is the case, the journey wasn’t entirely straightforward.  The day began with a quick warm-up at home, followed by an afternoon KLM flight from Amsterdam – though shortly after leaving the airport, it quickly became apparent that commuting to London city centre would not be easy.  A never-ending series of log-jammed commuter trains, significantly delayed over the course of the day, were constantly filtering through the airport to pick up arriving travelers destined to and through the city.  With the ultimately half-hour delay of my train’s  arrival and departure, I began the nearly two hour commute to Winchmore Hill to meet conductor Phil and the Winchmore Strings.

It is probably best to first backtrack a few years to 2013 when contact was first made between this north London orchestra and I.  At the time, as is always the case, I was eagerly in search of musical opportunities and happened to come across this ensemble.  I received an optimistic response from a delightful lady named Joan, who replied in promise that I would be added to the orchestra’s prospective performers – no specific date or timeline could be guaranteed, yet at some point I would indeed be summoned.

Flash forward to autumn 2015, and an email pops up in my inbox from the Winchmore String Orchestra.  As I open the message, lo and behold it is indeed from Joan who – as promised! – wishes to extend an invitation to collaborate with the Winchmore Strings.  Naturally, I cordially accept, and the concert date was soon confirmed.  Soon after, I received an email from conductor Phil who proposes the repertoire to be played as part of this year’s silver jubilee year concert – a Mozart concerto, and a piece by English composer Gerald Finzi.

After a initially tentative, yet productive first run-through of the Mozart Concerto (tentative mostly due to the usual familiarization period between soloist, conductor, and orchestra – though further exacerbated by cold hands with no warm-up), it was on to Finzi – a piece I had not known prior to preparing for this occasion.  A series of mixed emotions ran through me right from the start, though with the steady and positive reinforcement of conductor Phil, the musical partnership appeared to fit together as best as could be expected.  After a second run-through of the Mozart – with growing synergy between piano and orchestra – it was time to call it an evening, with confidence running high for the evening performance scheduled two days later.

However, before that momentous occasion, was a return date the next afternoon (Friday Nov. 18, 2016) at St. George’s Church in Beckenham on a beautiful Bechstein piano.  (I digress when I mention the incredible range of sounds and colours this instrument is able to make, especially being well taken care of and inside that wonderful church accoustic).  Graciously, this recital was my second at St. George’s this year.   I decided to push a bit harder over the previous few months and weeks to prepare some new repertoire for this occasion, and it quickly became apparent as a wise decision.  To my surprise and delight, there were several members of the audience who had attended my previous performance in the summer and were appreciative of the musical variety.  In this case, I presented a collection of Scarlatti sonatas and Schubert Sonata in A minor – all pieces of music very dear to me and largely unfamiliar to many audiences, yet always very well received.  Again with many thanks again to Peter and Mary, in addition to all the wonderful people who took time out from their afternoon to attend and support, it looks as though it may not be the last visit to Beckenham and I am already excited for what’s ahead!

As for the next evening with the Winchmore Strings…what an event it was!  The orchestra opened the concert with works by Rawsthorne and Purcell, and it was showtime.  Next up: Mozart concerto, K. 414.  The opening melody was introduced brilliantly by the orchestra, laying out its tutti series of catchy themes before the piano begins its first entry.  Maybe it is best to listen for yourself: here is part one of Mozart Piano Concerto No. 12, K. 414.  (Second movement and third movement are also now available!)

The second half of the programme included a return to the stage for Finzi’s Eclogue.  In this harmoniously rich and progressive piece, the piano and orchestra worked seamlessly throughout, punctuated by a very enthusiastic audience ovation and curtain call.  When all was said and done, it signified a thoroughly enjoyable evening indeed, and well worth the wait!